I recently completed a computational geometry related project. Its focus was on orthogonal polygons, which are polygons with edges that intersect at right angles. The project is called polygon-partitioner, and it’s primary task is breaking up orthogonal polygons into non-overlapping rectangles. It’s secondary task is approximating arbitrary polygons by orthogonal polygons. It was really challenging to find algorithms that do these things and I had a lot of fun doing it.

Here is a picture of what the output looks like. The input to the partitioning function is the exterior (in red), and the output is a list of rectangles.

I can’t take complete credit for the algorithm that partitions a polygon. The overall algorithm was (probably) first introduced in [Ferrari et. al, 1984]. The author of this blog post writes out the high level algorithm.

Apparently, partitioning polygons is useful for VLSI design problems. VLSI, or Very Large Scale Integration, is used for designing computer chips. That’s probably how this problem became interesting to researchers in the days of yore, but I don’t care about all that1. I was just having fun.

When I went about implementing the algorithm from [Ferrari et. al, 1984], there were a number of issues that came up that didn’t seem to have obvious solutions. I also couldn’t find much related to extracting the rectangles once you have successfully drawn the lines that make them (that is, once you’ve drawn the gray lines from the above image, return a list of rectangles). I’m writing this post to lay out my solutions. If these things are discussed elsewhere feel free to reach out and let me know.

Before we write down the high level algorithm, we need to define a few terms related to vertices (or corner points) on the boundary of our polygon.

Note that all angles are measured counter-clockwise relative to the positive x-axis.

An outline of the algorithm

Input: An orthogonal polygon $P$ without any chords.

I will go through each step in detail for the remainder of this post.

Let $E$ be the set of line-segments along the boundary of $P$.

Although this seems self explanatory, you can do a little extra work here to make your life easier during the later steps. In particular, you can identify which vertices along the boundary are concave ones, and choose how you want to create your interior lines when the time comes.

After this step, each vertex should have two pieces of data associated with it: a tag that specifies whether the vertex is concave, and an angle (that is either 0, 90, 180, or 270) which specifies the “direction of the point”.

First make sure the input polygon doesn’t have any extraneous vertices along the boundary. These are points that can be removed without changing the shape of the polygon. For example, if you are given a square then this square should only have 4 points. If it has more than 4 points then you know that at least one point can be removed without changing the shape. I accomplished this by looking at triplets of adjacent vertices and making sure that all three vertices don’t have the same x-coordinate, or have the same y-coordinate.

We will cycle through the vertices along the boundary in the clockwise direction. For each vertex $v_i$, we also consider the vertices immediately before and after $v_i$. Look at the angle these three points make relative to the interior of the polygon, it will be either 270$^\circ$ or 90$^\circ$2. If it is 90 then $v_i$ is convex, otherwise $v_i$ is concave.

Calculating these angles takes a constant amount of computational time per vertex, so this step is $\Theta(n)$ time complexity, where $n$ is the number of vertices in the polygon.

Let’s take the polygon below as an example. We will be traversing the boundary clockwise.

For each concave vertex $v_i$:

I opted to use a line sweeping based approach for this part of the algorithm. I’ve read that you can create these interior lines in $O(n)$, such as in [Liou et. al, 1990], but their algorithm seemed too complicated so I used line sweeping instead. My approach has $\Theta(n \log n)$ time complexity.

Input: Let $P$ be a simple orthogonal polygon without any chords, and $B$ be its boundary points (its vertices). Each vertex along the boundary is assumed to have additional metadata about its concavity and direction. Let $T$ be an empty binary search tree, and $C$ be an empty container of lines.

You should think of line-sweeping as moving an imaginary vertical3 line from left to right across a group of line segments. This image (taken from topcoder.com) shows the line-sweeping algorithm mid sweep. 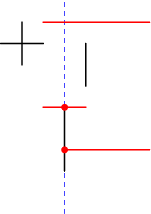 Notes on adding and removing points in your tree. The y-coordinates in the tree $T$ represent line segments that you are currently sweeping across. When you add $y_i$ to $T$, you are taking note that, at this moment of the line sweeping process, there is a horizontal line segment that is open and its y-coordinate is $y_i$. When you see the same $y_i$ again, you are closing that line segment.

Notes on creating $\bar{w}_i$. If the vertex is concave with associated angle 90, then using the binary search tree to find the closest $\bar{y}$ is really efficient. Each search of the tree takes $\Theta(\log m)$ operations to complete, where $m$ is the number of elements in the tree.

After we create the vertical lines, we need to create the horizontal lines. For this part, add the new points from $C$ to the set of boundary points $B$ and call this set $\bar{B}$. Then use $\bar{B}$ as input into the above line sweeping algorithm. Of course, you will now need to sort $\bar{B}$ by each point’s y-coordinate. For part 1 of the sweeping step, replace $y_i$ with $x_i$. For part 2 of the sweeping step, $\bar{x}_i$ will be the closest value in $T$ that is greater (or less) than ${x}_i$ where $w_i$ has associated angle 0 (or 180).

In this step, we sort the points on our boundary, a $\Theta(n \log n)$ operation. We also do $n$ operations with our binary search tree. Each operation on the tree — checking if the tree already contains a value, inserting or removing a value, finding a closest point greater than (less than) some value — has a time complexity of $O(\log n)$. In total, this part of the algorithm has a total time complexity of $\Theta(n \log n)$.

The line-segments in $E$ (implicitly) partition the polygon. Use them to find the non-overlapping rectangles.

Well that’s vague. Here is how I did it.

Input: The set of edges $C$ created in step-2, and the set of convex vertices denoted by $U$.

The main thing to realize is that you can identify points on a rectangle using the point’s “direction” (or angle), and knowing whether the point is convex.

For interior lines, you work through similar logic as in the convex point case.

In python, the code would be

In this step, we do a lot of sorting and searching within sorted lists. In step-1, we loop through all the boundary points and interior lines doing a constant amount of work per element. Thus, step-1 has $\Theta(n)$ time complexity. In step-2, we sort two subsets of our boundary points. Since there are fewer rectangles than there are points on the boundary, this is an $\Theta(n \log n)$ operation5. We also do $O(n)$ search operations, each having $\Theta(\log n)$ time complexity, yielding a total time complexity of $\Theta(n \log n)$ for this step of the partitioning algorithm.

I just want to stress that the above logic only works when you know there aren’t any chords in the input polygon. Also, implementing a method that handles polygons with chords is really annoying. The overview algorithm from that blog post I keep linking to looks slightly more complicated than the chord-free version above. Don’t be fooled, it’s way more complicated.

Anyway, the methods implemented in the polygon-partitioner package handle polygons with chords. Just note that when there are chords in the input polygon, I don’t guarantee to return a partitioning with the minimum number of rectangles.